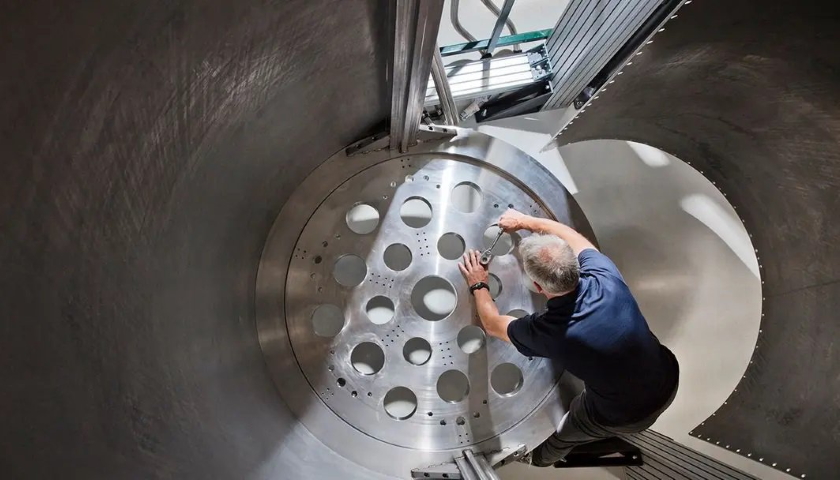 The ‘super fridge,’ known as Project Goldeneye, can cool 1.7 cubic meters of volume – up from around 0.7 meters on current large fridges. That’s about three times the space of an average US refrigerator.

This month, IBM announced it successfully cooled it to operating temperature (~25 mK) and wired a quantum processor inside.

The fridge, which may be the largest fridge in the world capable of such temperatures, is being moved to IBM’s Quantum Computation Center in Poughkeepsie, New York.

Dilution refrigerators use a mixture of helium isotopes He-3 and He-4. They remove heat from the mixture, and then use vacuum pumps to push it around, diluting additional He-3 into it until the temperature is met.

Goldeneye follows this process, but IBM claimed they improved it and went with a modular design that made prototyping and assembly easier than on rival fridges.

With a clamshell design, opening sideways, the entire external shell does not need to be removed to access the inside, which also makes maintenance easier.

The company claims that an included specially designed jib crane means that “one day” a single person could manage the fridge.

Goldeneye took three years to reach this point – but IBM noted that it’s not actually sure if it needs fridges to be this large.

Next year’s IBM Quantum System Two uses Bluefors’ Kide fridge, which is a smaller platform that will still allow IBM to connect multiple processors together through 2025.

Still, IBM said that the system will give it the ability to cool larger systems that may be developed beyond 2025, as well as conceptualize other cryogenic infrastructure.

The project has also yielded more insights into cryogenic science, which will help with the development of the IBM Quantum System Three system.

The quantum computers developed by the likes of IBM and D-Wave require extreme cooling infrastructure, but others hope to build systems that can run at room temperature. We profiled different approaches to cooling quantum computers last year.