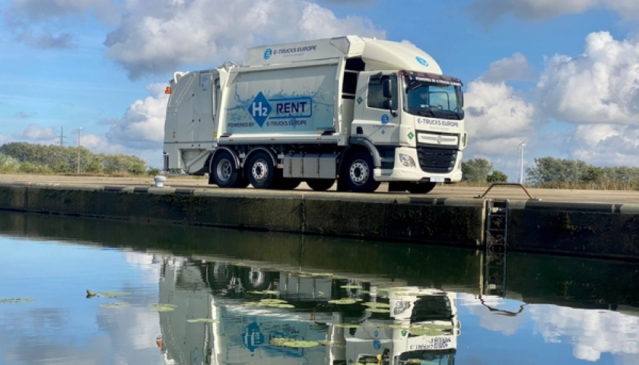 It is estimated that each hydrogen refuse truck makes a saving of 30,000kg of CO2 each year, reportedly the equivalent of 18 return flights between London and New York.

Hydrogen storage systems company Luxfer Gas Cylinders is helping to power a 10-strong fleet of zero-emission refuse trucks being deployed in Belgium, Germany and the Netherlands, where all waste collection vehicles must be zero-emission by 2030.

It is estimated that each hydrogen refuse truck makes a saving of 30,000kg of CO2 each year, reportedly the equivalent of 18 return flights between London and New York.

The trucks have been developed by Netherlands and Belgium-based sustainable vehicle manufacturer E-Trucks Europe, which initially designed and built electric trucks for collecting refuse. The six-hour lifespan of electric batteries, however, led designers to consider hydrogen fuel, enabling the vehicles to operate for far longer.

Depending on the size of the hydrogen tank, which can be 15, 20 or 30kg volume, the trucks can run for two days before requiring refuel.

E-Trucks Europe integrates its fully hydrogen-electric drive train into a truck chassis with superstructure according to the operator’s specifications.

“Luxfer has played a big part in helping to bring our initial vision to life. We consulted them because they were the only company in Europe building hydrogen storage tanks for mobility use, that had European certification,” said André Beukers, CEO, E-trucks. “We design the frames for the hydrogen cylinders, and in collaboration with Luxfer, they make the hydrogen tanks in the frames and fit them.

“We’ve recently built our first truck for our new rental service, which is really exciting, as it enables operators who might be considering investing in hydrogen solutions to ‘try before they buy’ – letting them see how hydrogen can work for them, ahead of making the financial commitment. Our aim for H2RenT is to make hydrogen solutions more accessible, which is essential if hydrogen is to be used to its full potential across the transportation industry.

Jim Gregory, European business development manager, Luxfer Gas Cylinders, added: “It’s fantastic to see the results of our work with E-Trucks Europe, and we’re proud to play a part in the positive impact their vehicles are making in Europe.

“Conversions like theirs allow the hydrogen infrastructure to be tested and for demand to grow at a sustainable rate – they’re vital to the hydrogen economy. We’re excited to see E-Trucks Europe’ innovation in practice, as interest in hydrogen vehicle evolves even further.”