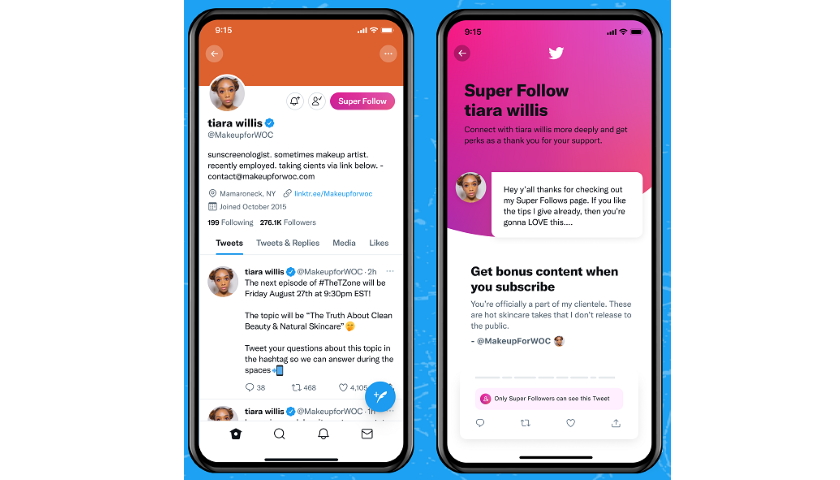 It’s been in test mode for the last few months, and now, Twitter has officially launched its new ‘Super Follow’ option, with selected creators in the US now able to charge a monthly fee for exclusive, extra tweet content for their biggest fans.

The addition could provide more incentive for Twitter’s most popular creators to become even more active on the platform, while also providing more ways to build their member community, and establish more reliance on the app.

“Through Super Follows, people can set a monthly subscription of $2.99, $4.99 or $9.99 a month to monetize bonus, “behind-the-scenes” content for their most engaged followers on Twitter. And followers get extra special access to their unfiltered thoughts, early previews and subscriber-only conversations from their favorite accounts.”

Creators claim up to 97% of any payments received through the option, after in-app fees, up to $50k in total earnings. After they reach that $50k threshold, the creator cut drops to 80%, with Twitter taking a larger percentage from then on.

Twitter has provided this example of how, exactly, those fees may be split based on these additional charges and considerations.

So Twitter and Apple will take a significant chunk of those fees, on iOS at least. But even so, that’s could result in big amounts flowing through to tweet creators via the option, establishing a new creator ecosystem within the app.

Once users sign-up to become Super Followers, creators will then have a new option to share their tweets as normal, or as an exclusive to these members.

Exclusive tweets will then be flagged in-stream, so that Super Followers know that only they can see that content.