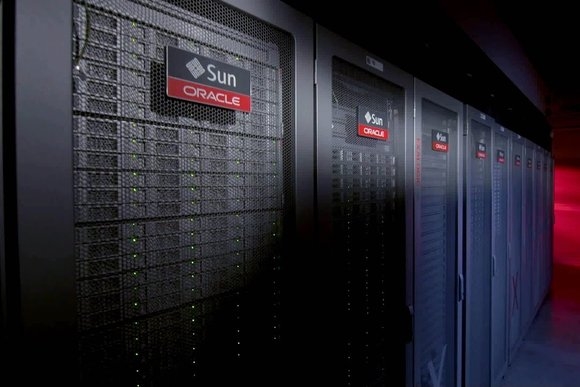 Enterprise IT giant Oracle has added bare metal instances to its Oracle Cloud Infrastructure service, which means customers can now rent their servers from the company without having to buy any software. These include GPU-based instances based on Nvidia’s V100 Tensor Core devices and HGX-1 appliances.

“The most important piece is the pricing. We are laser-focused on making sure that this is cost-effective, because when we talk about HPC, we are really talking about customers that are running on-premise, not the customers who are with the other cloud providers,” Karan Batta, senior product manager for hardware, big compute and HPC at Oracle, told DCD. “Our competitors are in-house data centers.”

The new service was announced at Supercomputing ’18 in Dallas.

Allowing customers to rent single-tenant physical servers in its data centers is a considerable departure for Oracle, a company primarily known for its software.

The new bare metal instances don’t come with any software pre-installed – they lack even an operating system – enabling the greatest flexibility in terms of the software stack, and giving expert users the ability to squeeze the most out of their network, compute and storage resources.

The servers that power Oracle’s latest crop of instances are built around Intel’s 32-core Xeon SP processors clocked at a respectable 3.7 GHz, SSD storage, and network interface controllers from Mellanox.

What sets them aside is the use of RDMA – a technology that allows servers to share their memory without involving the processor, cache or operating system of participant machines.

RDMA is especially useful in databases (Oracle’s forte) and massively parallel computer clusters – like the ones frequently employed to run complex simulations and other types of HPC workloads.

Oracle’s RDMA network works over Ethernet with 100Gb/s throughput and, according to Batta, delivers “single-digit microsecond latency” while being able to scale to more than 1,000 cores. All of the new bare metal instances come with RDMA networking as standard.

“The HPC space has been underserved for a long, long time, and we think we cracked it. We think this is a big deal: every manufacturing customer, every robotics specialist, every medical and genomics sequencing customer, all the GPU research out there – everything can move to this service,” he said.

The new HPC instances with RDMA are offered across Oracle regions in the US and EU priced at $0.075 per core, per hour.