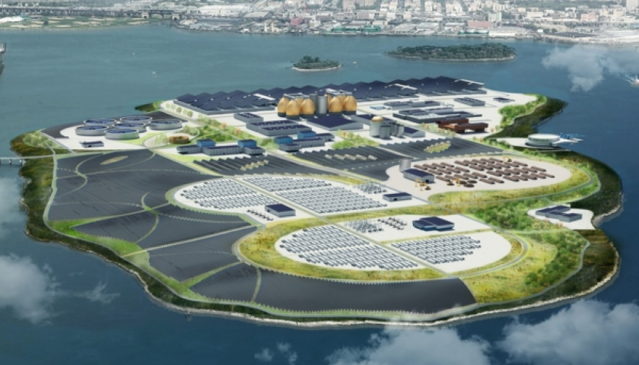 A comprehensive plan to transform New York City’s Rikers Island into a citywide green energy hub has been announced.

As City officials plan for the jail complex’s closure by 2027, Regional Plan Association (RPA) and Rhode Island School of Design’s (RISD) proposal calls on the City to replace Rikers’ ‘noxious’ energy and waste infrastructure with a range of green and equity-focused measures.

The report, A Plan for Renewable Rikers, follows last year’s City council vote to finally reimagine Rikers and outlines a vision to replace the island’s current facilities with a solar energy installation; recycling and composting infrastructure; and a citywide wastewater treatment plant. This would free up 182 acres of community space in Queens and the Bronx, and allow for a new research and training institute that would provide educational and workforce development opportunities to individuals formerly incarcerated at Rikers.

“As Rikers Island descends deeper into crisis conditions, it is critical that we are prepared to hit the ground running on a new vision for its future,” said Moses Gates, RPA’s vice president for housing and neighbourhood planning.

“RPA is proud to build on the work of environmental and criminal justice advocates in presenting a plan to reimagine Rikers’ 400 acres as a green energy hub that strengthens the city’s resilience to climate change and delivers substantial community benefits – especially for the Black, Brown and poor New Yorkers who have borne the brunt of mass criminalisation and noxious energy facilities.”

He added: “Following through on the vision for a renewable Rikers is a can’t-miss opportunity for the City to reach its decarbonisation goals while serving as a national model for climate-focused redistributive justice.”

After decades of inhumane living conditions, deaths, and calls for reform, the New York City Council voted in 2021 to permanently close Rikers Island and transfer ownership of the island from the Department of Correction (DOC) to the Department of Citywide Administrative Services (DCAS).

With this transfer comes the opportunity to shift energy and waste infrastructure – currently located in neighbourhoods surrounding the island in Queens and the Bronx – to Rikers itself, eliminating the severe health risks they pose and freeing up more space for potential community uses.

Some of the energy and equity-focused proposals highlighted in the Renewable Rikers plan include:

Research and Training Institute: designed in collaboration with those most affected by Rikers, the Research and Training Institute will enable existing community organisations to help impacted individuals cultivate the education, skills, and tools necessary to become key stakeholders in the City’s climate transition
solar energy installation and energy storage: creating infrastructure on the island that will be able to generate 1,500 MW of energy storage and 275 MW of solar power. A hub for renewable energy on Rikers could phase out nearby peaker power plants and train residents for jobs in solar installation and repair
citywide wastewater treatment plant: using Rikers as a location to consolidate four aging wastewater treatment plants with state-of-the-art technology, freeing up to 182 acres for community determined priorities and cleaning up local waterways
composting and recycling hub: building a new composting and recycling hub that is able to process over 365,000 tons of organic waste per year (34 per cent of NYC’s total organic waste stream), generate green jobs, remove polluting trucks from the road, and activate urban ecologies.

“We have an opportunity to transform Rikers Island into a haven for education, training, and sustainability,” said Andrea Johnson, assistant professor in the master-of-landscape architecture programme at the Rhode Island School of Design.

“The carefully thought out designs we’ve presented in this report show how the entire island can be activated as an energy hub for all of New York City, while freeing large swathes of neighbouring boroughs from aging energy infrastructure.”

“The Renewable Rikers vision was born out of conversations among directly impacted community members – survivors of Rikers, their family members, and neighbours who identified the disproportionate exposure to pollution in their neighbourhoods as yet another form of institutional racism and violence they had to survive,” said Melissa Iachan of the Renewable Rikers Coalition.