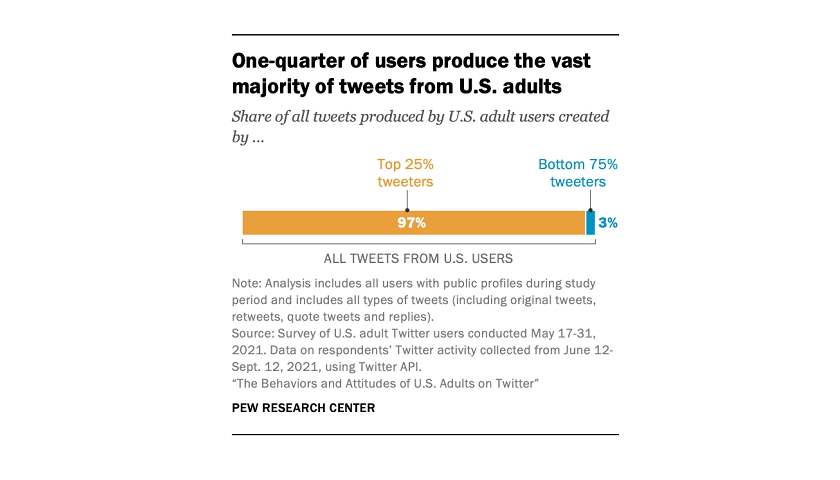 A new study by Pew Research has once again underlined the ‘dominance of the few’ rule on social media, with the numbers showing that around 25% of Twitter users in the US produce around 97% of all tweets.

As this chart bluntly illustrates, a small, highly active group of Twitter users dominate the discussion on the platform – which would suggest that getting the right users to share your brand messaging can have a big impact, as only a fraction of Twitter users are actively engaging and posting updates regularly.

Though it is interesting to note the specifics – in the further detail, Pew notes that: “Although the top 25% of users produced the overwhelming majority of tweets within the study period, original tweets made up just 14% of their posts. By contrast, roughly 80% of tweets from this group are either direct retweets (49%) or replies to other tweets (33%). Replies and retweets similarly make up the majority of posts from less active tweeters as well.”

So 82% of tweets, from all users, are replies and retweets, not original posts, with retweets being the dominant element. That could suggest that there’s not much original thought going around the Twitter-sphere, despite the amount of tweets being shared, while it also points to how the platform is being used to amplify certain elements through re-amplification.

Which is pretty overwhelming, really. 50% of all tweets, based on these stats, are retweets – which makes sense, as that would also include people adding their own comments to those retweets as well (Pew doesn’t specify the use of Quote Tweets here). But it may also indicate that Twitter is not the hive of ideas and discussion that it might seem, with few users sharing anything at all, and when they do, much of that is tied to previous tweets, not entirely original thought.

Really, the data underlines the significance of news sharing and discussion in the app, as opposed to direct interaction, which could indicate the platform’s influence in this respect, in prompting more engagement around news content.

Pew’s study also looked at overall engagement – and if you’re not seeing a heap of retweets and Likes in the in app, this might make you feel a little bit better about your performance.