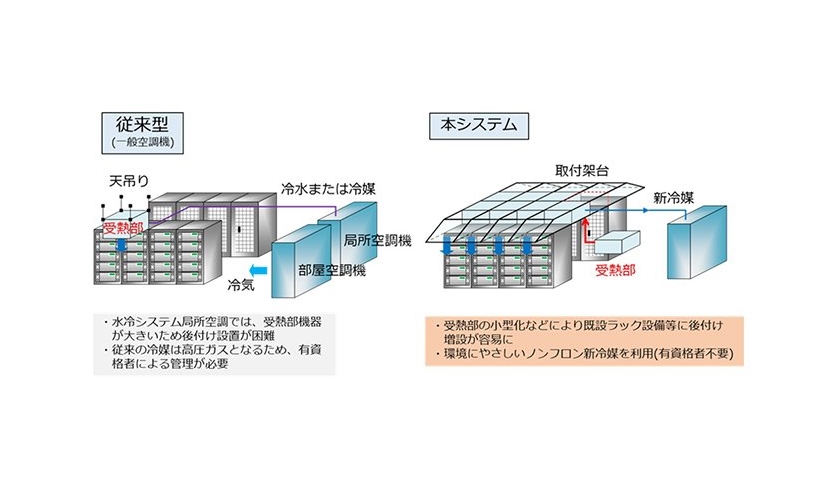 Japanese technology companies NEC and NTT Communications have teamed up to engineer a system to cool data centers using less energy than any other, using a new low pressure refrigerant.

R1224yd was originally designed for use in centrifugal chillers, and has also been proposed as a working fluid in heat recovery systems generating power from waste heat.

“This system will contribute to the reduction of power consumption and global environmental load by putting a new refrigerant (non-CFC) into practical use for the first time in the world as an air-conditioning system and having a structure that can be easily installed on existing floors, server rooms,” according to a joint press release issued by NEC and NTT last week (Google translation). “It will be the first time in the world to put an air-cooled air conditioner system using the new refrigerant (R1224yd) into practical use, reducing power consumption and realizing a global environment-friendly cooling system.”

R1224yd was first listed and approved by ASHRAE in October 2017, and its potential for data centers was quickly realized. In 2018, NEC posted a release promising “a heat removal technology with vapor-compression that uses low-pressure refrigerant” which it aimed to commercialize by 2020. With this announcement, that seems to have come to pass.

Initially, the new cooling systems will be placed in NTT data centers, but by 2022 the pair are hoping to scale up production and sell them to customers with large-scale cooling needs, including those dealing in communications equipment.

The companies claim that the system is easy to retrofit to existing facilities. This is because they have put the low pressure coolant into a phase-change system with a high-performance heat absorption component – this means a small size system which can be easily built into existing facilities: “The size of the heat receiving part has been reduced (height about half that of conventional products). As local air conditioning for floors with low ceilings, it is easy to retrofit to existing buildings and equipment.”

Low greenhouse effect
NEC said said that R1224yd would improve the cooling efficiency of servers, and also reduce air conditioning power use by 50 percent compared with conventional cooling systems. Total data center power use was cut by 20 percent, as demonstrated during a trial in a data center in India.

The breakthrough is having a refrigerant which has a low global warming potential (GWP), but which still performs well in cooling systems. Traditional refrigerants such as chlorofluorocarbons (CFCs) and hydrofluorocarbons (HFCs) are highly potent, with a GWP thousands of times bigger than CO2, the most widespread and best-known greenhouse gas. They also remain in the atmosphere for decades.

Authorities including the EU have ruled that CFCs and HFCs must be phased out, but till now their replacements have been worse at the job of cooling . They have also been more unstable, to ensure they don’t remain in the atmosphere – which means some are a fire risk.

R1224yd is a hydrofluoroolefin (HFO), a class of compound which has a GWP around the same as CO2, but with good refrigerant performance and stability. HFOs are regarded as a “fourth generation” refrigerant, with less than 0.1 percent of the GWP of hyrdofuorocarbons (HFCs).