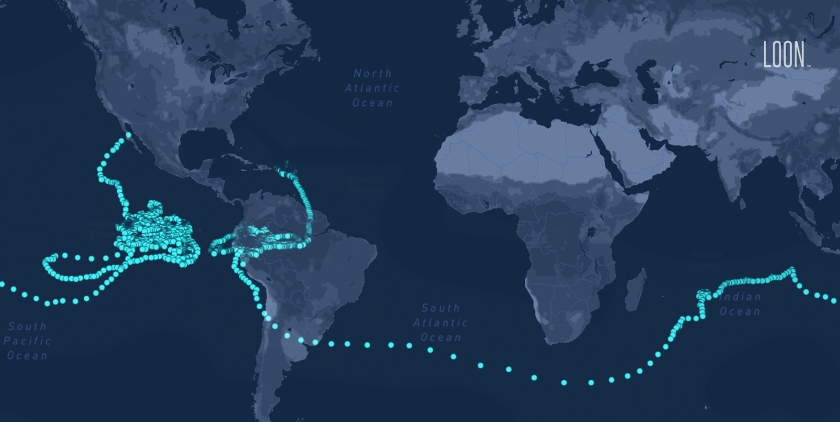 Loon balloon HBAL703 accomplished something that none of its silvery, high-flying compatriots have: 312 days soaring in Earth’s stratosphere.

HBAL703 launched from Puerto Rico in May of 2019, navigated to Peru, and then provided test service for three months, according to a Medium post documenting the accomplishment and Loon’s work to figure out a stratospheric balloon that can fly for lengthy periods in order to provide telecommunications services. After that three-month period, Loon sent HBAL703 south to circumnavigate the globe. It eventually settled over the Pacific Ocean, where it floated for another seven months and eventually landed in Baja, Mexico in March of this year, where it was recovered for further analysis by a Loon team.

“This new duration record is exciting not because we flew one balloon for 312 days, but because it is a very visible indicator that our efforts to make all of our flight systems last longer is working,” wrote Salvatore Candido, CTO of Loon.

Candido also said in a footnote that HBAL703 was also participating in “a very exciting navigation system experiment… More on that to come.”

In the Medium post, Candido gave the broad outlines of Loon’s work to engineer a better balloon: Trying different materials, form factors and techniques for building the balloons; running detailed simulations prior to flight; and recovering its systems and doing painstaking data analysis, including digital scanning of the entire physical balloon once it has been recovered. “We’ve tried a lot of things, and some of them have looked quite strange,” he added, noting that Loon balloons have, and continue to be, spotted and identified as UFOs (or “ovnis”, in Spanish”), sometimes showing up on Twitter. He said that Loon has a fleet of nearly 100 systems in flight and launches balloons nearly every week.

While Loon has ultimately found that conventional wisdom on stratospheric balloons to be “directionally correct,” Candido said, its willingness to try different things has “uncovered some key innovations that have unlocked an ability to fly capable and long-lasting flight systems in the stratosphere. Today, our flight system looks more like a balloon-based high altitude platform (HAP) than a conventional stratospheric balloon.”

So, Candido said, what can a balloon do for a year in the stratosphere?

“We use them primarily for connectivity, but we’re beginning to understand that this is just scratching the surface of the opportunity presented by the stratosphere,” he wrote. Loon sees the stratosphere as a “massive opportunity” for telecom, high-resolution earth observation and weather prediction and modeling; it co-founded the HAPs Alliance with Softbank in April of this year to target the space. The alliance also includes carriers China Telecom, Deutsche Telekom, Telefónica and Bharti Airtel.

On a more practical level for the present, a longer flight duration for Loon systems means a lower cost per flight-hour. “Longer Loon flights let us reach and persist in places (like over the middle of the Pacific ocean) that are typically hard to remain for extended periods of time,” Candido wrote. “That all adds up to being able to scale our cell towers in the sky to more people and places, and continue toward our mission of connecting people everywhere.”