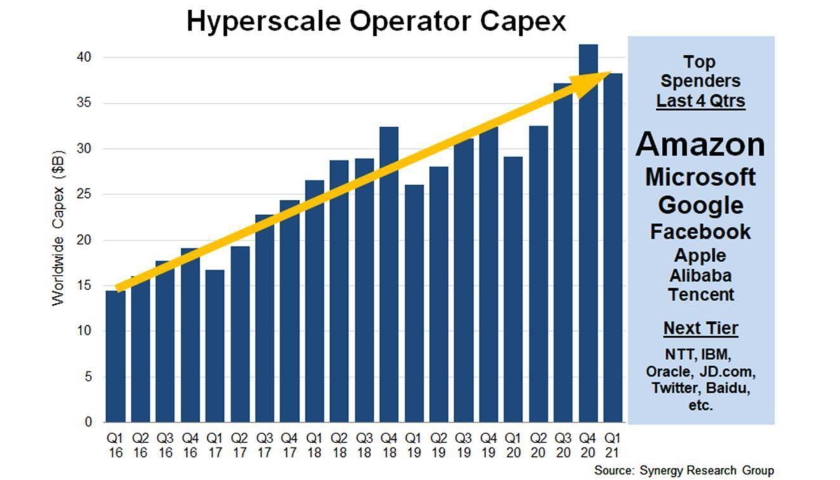 Hyperscale operators spent $38 billion in the first quarter on capital expenditure – up 31 percent on the same quarter last year.

The world’s cloud giants spent more than $149 billion in the last four quarters on capex – half of which went to building new data centers. The pack is led by Amazon, Microsoft, Google, and Facebook, according to a report from Synergy Research Group. The researcher reckons the world now has 625 hyperscale facilities – up from 541 in July 2020.

“For hyperscale operators the pandemic proved to be more of a stimulus to growth rather than a barrier. Over the last four quarters we continued to see extremely strong growth in revenue, capex, and data center spending,” said John Dinsdale, a Chief Analyst at Synergy Research Group. The $38 billion figure is an increase from $32 billion just over a year ago.

The top four spent far more than their rivals, with Amazon and Microsoft growing particularly strongly, and Google dropping off a little.

In exchange for the money they have been spending, the top 20 hyperscale companies have generated massive revenues, which have been increasing faster than their capex outgoings: over $1.7 trillion in aggregate over the last four quarters, which is up 24 percent from the preceding four quarters.

“It is interesting to compare their fortunes with other types of major service provider around the world,” said Dinsdale. “As hyperscale capex levels keep on setting new records, it is in stark contrast with telcos whose capex has essentially been totally flat for five years now, mirroring their inability to grow overall revenues. Given the ongoing growth in service revenues for hyperscalers and the ever-increasing need for a larger global data center footprint, we are forecasting continued double-digit growth in hyperscale capex for several years to come.”