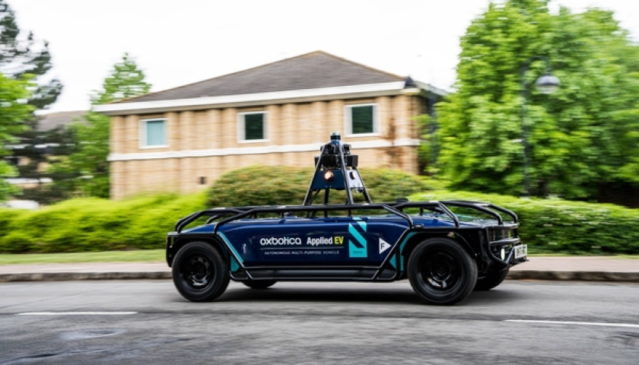 The all-electric AppliedEV prototype vehicle, driven by Oxbotica, is operating in Oxford with no on-board driver, marking the next step in commercialising AV technology. The target for the first public on-road business deployment with Ocado Group, with a goods delivery variant, completing customer orders will be from 2023 onwards.

Oxbotica will also now accelerate commercial deployment of autonomous vehicles globally. Working with partners, such as ZF, BP and mobility organisation Nevs, according to Oxbotica, it will enable autonomous passenger shuttles and industry-specific platforms, all driven by its core product, Driver.

Oxbotica Driver uses a combination of radar vision and laser-based sensors to provide the vehicle with a rich understanding of its surroundings, with multiple AI continuously checking and explaining decisions.

This process is a foundational requirement for the safe deployment of zero-occupancy autonomous vehicles and underpins the development of innovative insurance solutions for the future of transportation.

“Oxbotica is changing the way people and goods move. Our goal is to be indistinguishable from perfect on safety, and this achievement alongside our partners is proof of that,” said Paul Newman, founder and CTO, Oxbotica.

“It’s a historic moment for the UK, the transport and logistics sector, autonomous vehicle technology, and Oxbotica.”

The achievement, hailed as a European first, follows two years of extensive trials by Oxbotica to define its robust safety case and develop its system architecture, in both off- and on-road operations across the UK, Europe and North America.

Oxbotica claims it is also a significant milestone for the insurance market and the development of insurance solutions for autonomous vehicles as part of the UK’s evolving mobility network.

The insurance programme, arranged by broker Marsh and created by Apollo Group’s ibott initiative through its MGA in partnership in the UK with insurer Aioi Nissay Dowa Europe, is the first of its kind in the UK and is tailored specifically for the risks associated with L4 autonomy on open roads.

“This Europe-first trial positions the UK as the number one destination for autonomous vehicle development and leapfrogs us towards commercialisation and the subsequent economic benefits available in this hyper-growth technology category,” said Gavin Jackson, CEO, Oxbotica.

“Autonomous vehicles will create billions of pounds in new revenues and generate thousands of high-skilled jobs, while helping cities and businesses meet their targets for carbon reductions. Our zero-occupancy, all-electric, fully autonomous prototype is exactly the new-type vehicle that will form the mainstay of the transportation industry for decades to come.”