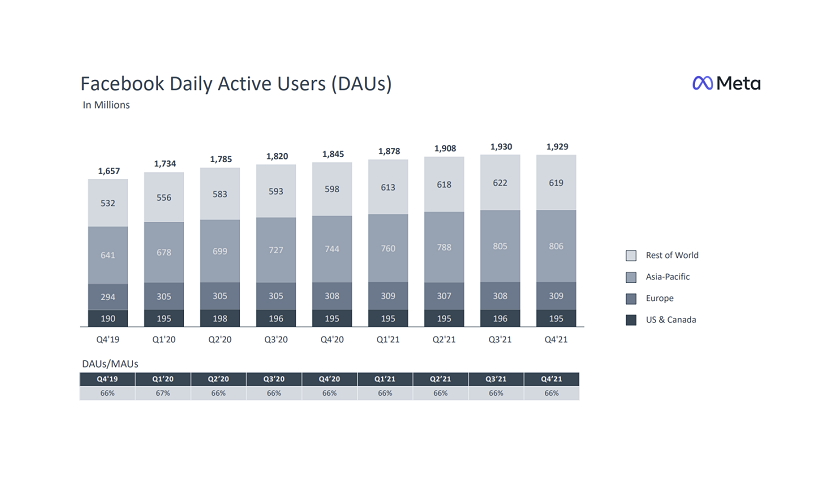 Meta has posted its Q4 2021 and full-year performance result, showing a rise in monthly active users, and significant growth in revenue, as it continues to evolve towards the next shift in digital connection.

Though there are also some concerns, with Facebook’s growth momentum slowing, even declining in some respects, which could reflect growing disinterest in that platform specifically.

But that’s not even the whole story – the bigger concern for Meta is in daily actives, where Facebook actually declined for the first time ever.

As you can see here, Facebook did add users in the Asia Pacific and European regions, but overall, it lost a million actives.

Which is a lot. It’s difficult to get a real sense of what that means when the numbers are honed down to more compact metrics like those displayed above, but a million people decided that they no longer needed to check in on Facebook every day, and likely a lot more than that when you consider that it also added new users in some regions.

Is that a problem? I mean, as you can also see, Facebook usage has been stagnant in the North American region for some time, which most would put down to market saturation – everyone who’s going to use Facebook is now doing so, and there’s not many more new people to add in. But now we’re seeing the same in other markets, which could be a big issue for Facebook’s broader growth.

Which is why, of course, Meta’s more keen to highlight this stat instead, its ‘Family of Apps’ usage, which combines total unique users across Facebook, Messenger, Instagram and WhatsApp.

As you can see, across all of its apps, Meta actually added 10 million more users, which likely means that WhatsApp and Instagram are still growing. Meta doesn’t break out individual usage stats for these apps, but broadly speaking, it maintains at least some growth momentum, and its apps are still the most used social media platforms by far, with close to 3 billion DAU.

But still, the fact that Facebook saw a decline, especially over the Christmas period, when people are generally more active online, is a concern. That’s likely part of the reason why Meta announced its re-focus on younger users last year, and why it’s increasingly putting more emphasis on the metaverse and the next stage of digital connection.

Maybe, its evolving focus will reduce concerns around declining usage of its apps – though it will be interesting to monitor these stats moving forward, to see whether this is in fact an ongoing trend.

In terms of revenue, Meta posted another strong result, bringing in $33.6 billion for the quarter.