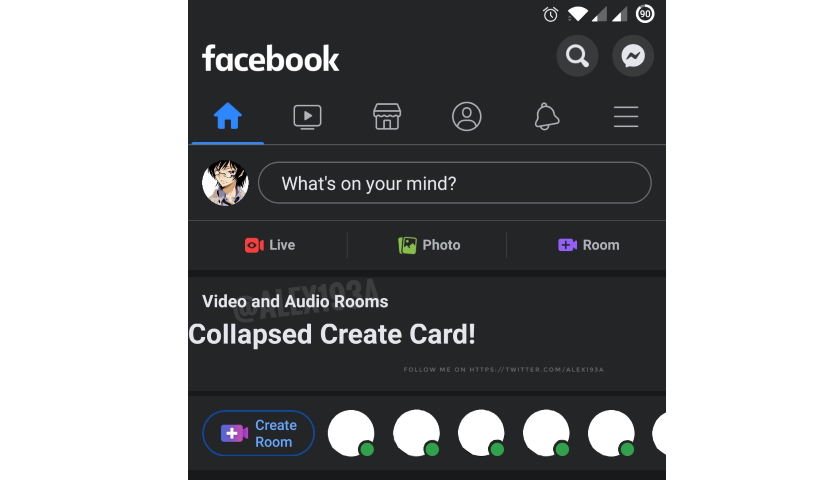 Yes, Facebook’s Clubhouse clone is coming, and it could be here very soon, according to a new discovery in the back-end code of the app.

As you would expect, with the sudden rise of audio social, Facebook has also been working on its own live audio meeting rooms feature, which would enable Facebook users to create audio broadcasts that users can tune into, and participate in, within the app.

This is actually not a major stretch for Facebook to create, as it already has its video Rooms feature that it added in May last year, which enables users to create private video chats that others can drop into. Building a public, audio-only version of the same is technically something of a step back, reducing the data load by shutting off video, while also making them open to all users.

Which, according to this new screenshot, is apparently where Facebook is heading:

As you can see in this image, posted by developer Alessandro Paluzzi, Facebook’s working on new audio-only options for Rooms, which would enable hosts to create public or private audio groups chats.

That would essentially facilitate the same use-case as Clubhouse, and Twitter’s Spaces, by providing a way for Facebook users to create public, audio meetings that anyone can drop into in real-time.

That could turn up the heat once again on Clubhouse, which is still in invite-only mode. Earlier this month, Twitter flagged its intention to open up Spaces to all users by April, which would enable broadcasters to reach much wider audiences in the app, while Twitter’s also working on various discovery tools and options to enhance the Spaces experience.

If those efforts work out, you can expect Facebook to also accelerate its plans for the same, and if Facebook can provide its own public Rooms discovery process, while enabling people and Pages to reach their followers and friends by highlighting in-progress audio Rooms at the top of the app, its audio Rooms could also become a big lure for creators looking to maximize their reach and community-building efforts.

But where Facebook’s audio Rooms might really win out is in Facebook groups, which 1.8 billion users already engage in every month. Imagine going to your favorite Facebook group and seeing that the people who you regularly interact with in the comments are live in an audio room, right there and then, which you can also join.

Audio meet-ups like this reduce some of the performance pressure of video, which can make them feel more casual, and that could make them a significant addition to already engaged, niche-focused Facebook groups.

It seems like a no-brainer that Facebook will look to add this functionality soon, and as noted, it’s really not difficult, considering the technical infrastructure to support such is already there. Twitter also has the same advantage with Spaces, which is built on the existing Periscope architecture, which means that many more people can join Twitter Spaces, and it’s able to support many more streams. Clubhouse, which is growing its server capacity in line with demand, is somewhat on the back foot in this respect.

It’ll be interesting to see when Facebook looks to go live with its audio rooms feature, and how it looks to roll it out. Either way, it could definitely be a good option to consider, especially for brand Pages looking to build community, and maximize engagement in the app, with a view to driving more referral traffic.