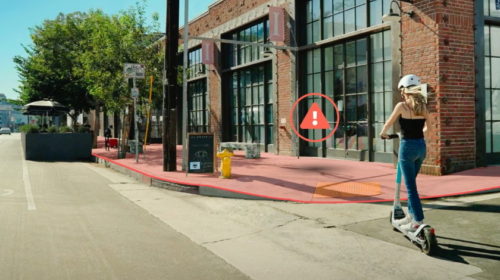 Micromobility company Bird has announced it is trialling sidewalk riding prevention technology for its electric scooter fleets in Milwaukee and San Diego with a view to a wider global roll-out next year.

The “smart sidewalk protection” module, which is integrated into Bird’s vehicles, is designed to prevent micromobility devices from being used on city sidewalks and footpaths, or other indications of unsafe operation.

Riders who are detected travelling on a sidewalk will receive both audible alerts as well as mobile notifications warning them to return to the road. Ignoring the instruction will result in the electric vehicle steadily losing power by removing throttle and being brought to a safe stop.

But, in a blog post on its website, Bird points out the process of preventing sidewalk riding isn’t easy and requires, among other things:

“Any proposed solution must be able to work in hundreds of different city environments across the globe and be rolled out with minimal cost and labour while maintaining accuracy over time,” the company writes.

To help tackle these issues, Bird teamed with Swiss communication and positioning technology specialist, U-blox and using Bird’s data, the companies co-developed a version of the ZED-F9R module tailored specifically to meet the needs of the shared micromobility industry.

Both the co-developed sensor-fusion U-blox module and Bird’s precision sidewalk map data are integrated directly into all its newest e-scooters.

According to Bird, this “key differentiator” means that its smart sidewalk protection system can be implemented at scale without risk of damage caused by weather or vandalism, unlike expensive, externally mounted cameras.

“Everything we build at Bird is centred around safety and scalability, [and] sidewalk riding detection is no exception,” said Scott Rushforth, chief vehicle officer at Bird. “After three years of building, testing and piloting a range of technologies, including but not limited to on board cameras, GPS tracking, ultra-wideband and beacons, we found that each was insufficient with regard to accuracy, precision, immediacy or scalability.”

He added: “Our testing led us to a collaboration with U-blox which resulted in the development of our end-to-end sensor fusion solution that meets our criteria.”

Bird’s sidewalk detection technology is expected to be piloted in Madrid as the first city in EMEA in early 2022, with plans for a broader deployment to additional locations of its fleet in more than 300 cities later the same year.

The module processes real-time vehicle data including wheel speed, IMU sensor data including acceleration and spatial orientation, and real-time kinematic data that corrects for ionospheric interference. The technology is also optimised for e-scooters by applying dynamic models matching the movements of the vehicle.