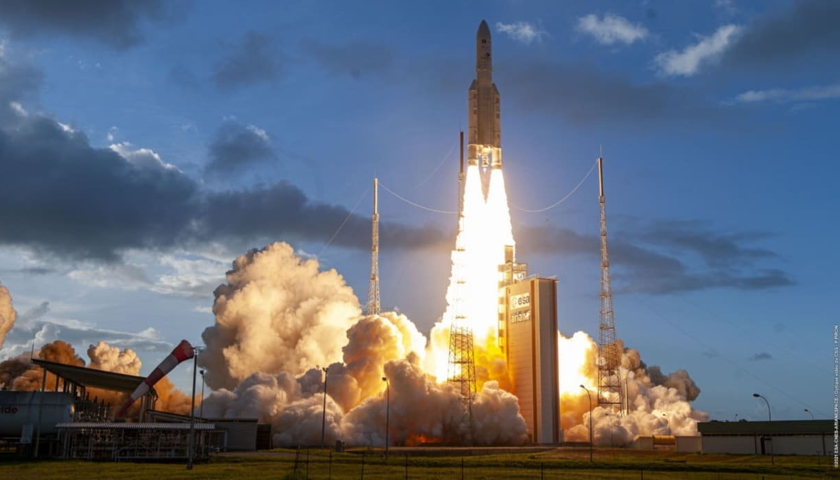 ArianeSpace has launched telecommunications satellites for Embratel and Eutelsat into orbit.

Two telecommunications satellites were released into orbit; Star One D2, built by Maxar Technologies for Brazilian operator Embratel, and EUTELSAT QUANTUM for Eutelsat, developed with Airbus Defence and Space and the European Space Agency (ESA).

“With this new Ariane 5 success, the first in 2021, Arianespace is pleased to be continuing its service to two of its most loyal customers, operators Embratel and Eutelsat,” said Stéphane Israël, CEO of Arianespace. “This mission with two highly innovative satellites on board, has reconfirmed how the competitiveness and reliability of our launch solutions serves the ambitions of our customers.”

Star One D2, Built on Maxar’s 1300-class platform with Ku-, Ka-, C- and X-band transponders, will expand broadband coverage in Central and South America. With a power of 19.3 KW and weighing 7 tons, the new system joins Embratel’s fleet of five geostationary satellites – Star One D1, C1, C2, C3, and C4.

“We are very happy with the successful launch of Star One D2, the largest satellite we have ever built and which will further strengthen our market leadership, providing more resources for telecommunications in Brazil and Latin America”, says José Félix, president of Claro in Brazil.

“The new satellite will expand our operations with clients in the region and will provide more capacity for data transmission in general and for our cellular telephony structure (backhaul), helping in the expansion of mobile services”, says José Formoso, CEO of Embratel.

Developed in partnership between the European Space Agency (ESA), Eutelsat, and Airbus Defence and Space, EUTELSAT QUANTUM’s configurable software-based design means it will be the first universal satellite that can be repeatedly adjusted to the customer’s requirements as needed.

“Our congratulations to Arianespace and the Guiana Space Center teams for successfully launching the EUTELSAT QUANTUM satellite,” said Pascal Homsy, Eutelsat’s CTO. “The collaboration between Eutelsat, ESA, the UK Space Agency and Airbus Defence and Space on this ambitious satellite program has resulted in a world-first. EUTELSAT QUANTUM will supply services with unprecedented in-orbit reconfigurability in coverage, frequency and power, allowing complete mission rehaul, at any orbital position. It is a testimony to the innovative spirit and expertise of the European Space industry.”

Maxar has also been commissioned to manufacture a new geostationary communications satellite for SiriusXM. The SXM-9 satellite, based on Maxar 1300-class platform, will come into operation in 2024 and replace SXM-7, which was declared a total loss following a payload anomaly arising a month after its launch. The SXM-8 satellite completed in-orbit testing and has been handed over to SiriusXM last month.

This week China’s space agency unexpectedly launched two satellites from its Taiyuan Satellite Launch Center. The two payloads, called KL-Beta-A and KL-Beta-B, were built by the Shanghai Institute for Microsatellite Innovation of the Chinese Academy of Sciences (CAS) and are operated by the German-Chinese company KLEO-connect. The two satellites are reportedly prototypes of LEO communications satellites ahead of Kleo’s planned constellation to provide Internet of Things services.