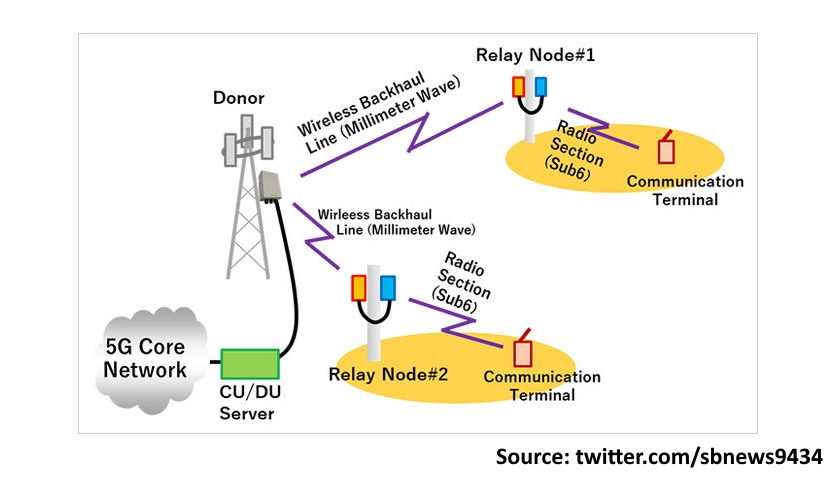 In a release, the telco said that the test was conducted using SoftBank base stations located in Akiruno City, Tokyo, from January to April 2022.

The companies said that the aim of the test was to verify the effectiveness of millimeter waves as a backhaul line; establish end-to-end communications from the CU (Centralized Unit, aggregation node)/DU (Distributed Unit, distributed nodes) server to the communication terminals; confirm the effects of weather changes such as rainfall and snowfall and collect data for the development of commercial products conforming to O-RAN Alliance specifications.

During the test, SoftBank and Kyocera connected the 5G millimeter-wave as a backhaul line and conducted connection tests from the 5G core network server to the communication terminals via CU/DU, donor station, and relay node station.

“This system used a 5G millimeter-wave to connect a backhaul link between a donor station and a relay node station that constitutes the access area. The donor station conformed to the O-RAN Alliance front-hole specifications that connect to the network. In view of the demonstration test results, Kyocera and SoftBank are pleased to announce that they successfully verified stable communications and system effectiveness,” SoftBank said.

“Through this demonstration, Kyocera and SoftBank confirmed that a backhaul system utilizing 5G millimeter-wave would contribute to shortened construction periods and cost reductions through efficient use in areas where 5G networks are difficult to install due to challenges such as topography. Both companies also confirmed that 5G millimeter-wave technology could be a new means of communication between base stations and terminals.”

Kyocera and SoftBank also said they will continue to consider how to address issues such as lowering power consumption and operational automation. Both companies will also consider systems that can be applied to various needs in Japan and overseas.

In October 2021, SoftBank announced that it had started to offer 5G Standalone services. With this new launch, SoftBank claimed to be the first carrier in Japan to offer 5G SA commercial services.

The Japanese carrier noted that the most important features of 5G SA networks are their ability to deliver network slicing and Private 5G networks, which are customized networks tailored to individual enterprise needs, and other connectivity features based on advanced technologies.