With Apple’s planned IDFA update set to be launched any day now, the digital marketing industry is preparing for the worst, with the up-front prompts that will be displayed in all iOS apps expected to see many users switch off data tracking entirely, limiting audience targeting options.

The removal of in-app tracking data will impact things like re-targeting based on purchase activity, and the attribution of conversions based on ad exposure. That’s forced many media buyers to switch up their approaches in preparation, and could reduce the overall effectiveness and response rates to digital ad campaigns.

Of course, the impacts will be relative to actual take-up – the more users that opt to stop apps from tracking their activity, the less data will be available, and we have no idea, at this stage, how many people will actually click on the ‘Ask App not to Track’ prompt.

The expectation, as noted, is that many people will indeed choose to opt out, especially given the broader focus on data tracking issues, including this week’s reported data breaches at both Facebook and LinkedIn.

But now, we have an indication of the actual take-up rates we can expect, with Apps Flyer conducting a survey of over 300 apps, and responses to the new prompts.

Over the last three weeks, Apps Flyer monitored user responses to over 13.2 million exposures to the new IDFA prompts, like the one above. Based on this, the data shows that 41% of people actually chose to allow tracking, which is much higher than industry predictions. 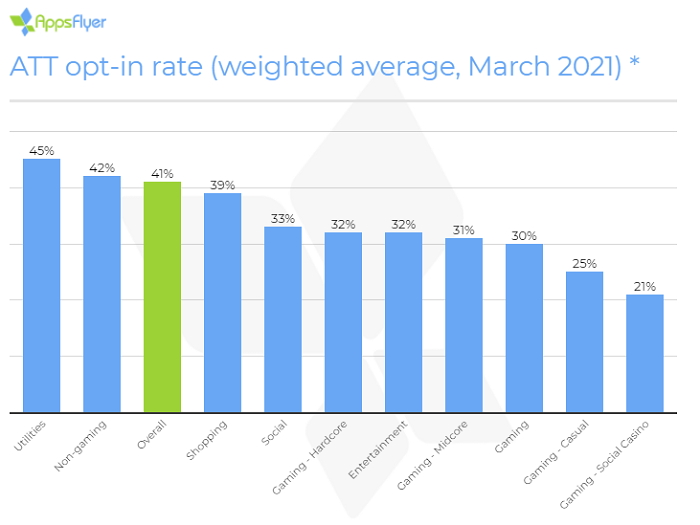 As you can see, the opt-in rates vary by app category, but the overall average saw almost half of people opting to allow tracking to continue.

That, as noted, is far higher than many industry analysts have predicted, and could mean that ad targeting won’t be as badly impacted as forecast. That would be good news for the digital marketing sector overall – though it is worth noting that this is a limited study, and may not be fully indicative of the overall impacts, once the prompt gets a complete launch.

Apple’s IDFA change has been highly controversial, with Facebook launching a public campaign to oppose the change, arguing that it will negatively impact SMBs by driving up the cost of their digital ads. Apple is also contending with a group of Chinese companies that have banded together to launch an alternative data tracking tool for their apps, which will essentially bypass IDFA, and is likely in violation of Apple’s terms. That could put Apple in a tough position on the broader roll-out of the new prompt – but thus far, the company has remained committed to the new process, which, again, is expected to see a broader launch soon.

Hopefully, based on this data, that won’t see the total removal of user data from ad targeting tools, because while Apple’s push makes sense, in giving users more control over their personal data, it won’t stop users from seeing ads within apps and online. It’ll just mean those ads are less targeted, which will arguably be a worse user experience.

In addition to this, Apps Flyer provides some recommendations for brands looking to negate the impacts of the change, including the creation of your own pre-alert prompts to better explain how user data is utilized (note ‘ATT’ refers to the name of Apple’s new ‘AppTrackingTransparency’ prompt).

“We highly recommend marketers use a “pre-ATT prompt”, basically gating the Apple ATT dialogue behind your own native prompt. That native prompt is entirely yours, so you can customize the design, timing, and messaging to best fit your app – and ultimately show users the value of opting-in.”

That’s the approach that Facebook is now taking, with further information on why users should allow data tracking in its apps.

Really, it’s likely more important that the bigger apps like Facebook update their approaches, as that’s where the majority of valuable response data will come from, but for app developers, it’s worth noting this tip, and considering how you might be able to negate the potential response.

The change will still be significant, it’ll still cause disruption to data tracking processes. But maybe, it won’t be as bad as expected.

The numbers here definitely provide some cause for hope on this front.