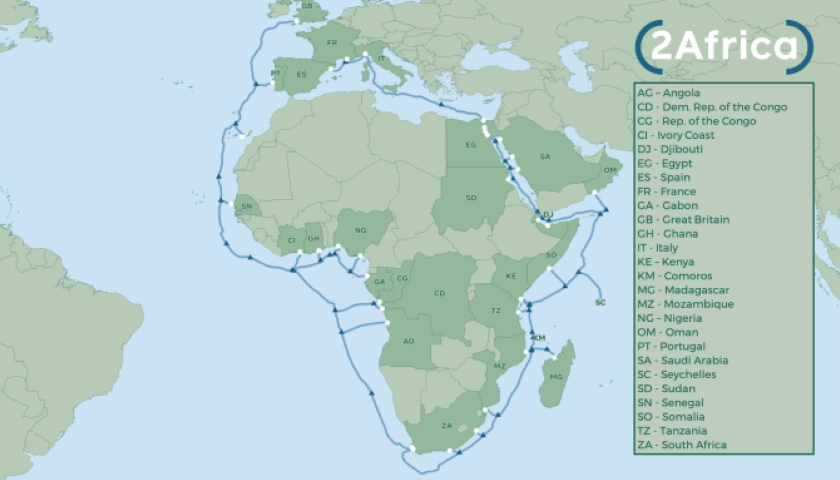 2Africa was announced last year as a cable that would start in the UK, travel south down West Africa, before looping back up around the other side of the immense continent, crossing through the Suez Canal, across the Middle East and the Mediterranean, before finally landing in Spain.

Along the way, it would connect 23 countries, including Angola, Djibouti, Egypt, France, Italy, Nigeria, and Saudi Arabia.

Since then, the consortium has added the Canary Islands. Now, with the latest addition, the cable will also connect the Indian Ocean island countries of Seychelles and Comoros, as well as Angola and an additional connection to Nigeria.

In total, the cable will have 35 landings in 26 countries.

“The significant investment by Facebook in 2Africa builds on several other investments we have made in the continent, including infrastructure investments in South Africa, Uganda, Nigeria and the Democratic Republic of Congo,” Facebook said in a statement.

Alcatel Submarine Network is building the actual cable, which is expected to go live in late 2023.

Facebook said that most of the subsea route surveying is complete, and the Egypt and Mediterranean Seas deployments are almost completed.

Though Facebook and China Mobile are partners on this project, the Chinese telco this week dropped out of a US-Philippines cable project also involving the social media firm amid pressure from US regulators.