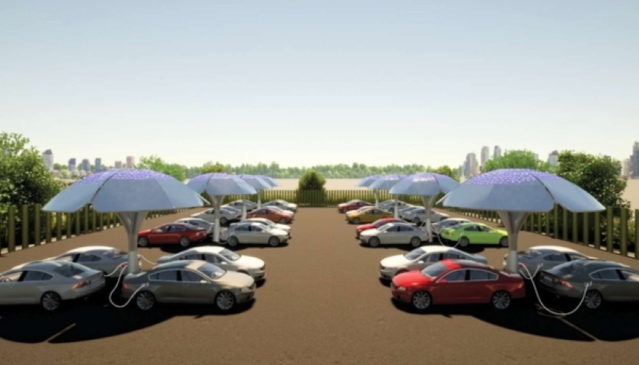 A single tree can reportedly provide all the electricity needs of an average household through clean, secure and renewable solar power. The first SolarBotanic Trees will become available in early 2023.

The trees, which are designed to be aesthetically pleasing as well as sustainable, are ideally suited to large-scale commercial environments such as car parks at airports, shopping malls, exhibition centres, office sites and sports stadia.

The SolarBotanic Tree is the result of five years of planning research and design, and features new photovoltaic (PV) 3D leaf-shaped nano-technology to harness solar energy for charging and energy storage.

It has been developed in collaboration with Co-Innovate, a business support programme which supports SMEs in London by using academic and innovation resources at Brunel University London, the Manufacturing Technology Centre (MTC) in Coventry and the AMRC’s Design and Prototyping Group who will be conducting the prototype testing.

This first-generation SolarBotanic Tree will eventually spawn a family of products, primarily aimed at the rapid electric vehicle (EV) charging market for homes, businesses and commercial car parks, where solar power can be captured and stored for charging points. It will also encompass artificial intelligence-driven (AI) energy storage and power management system (PMS), where trees can be linked and form part of a local grid, or feed into the main grid.

SolarBotanic Trees are the brainchild of Harry Corrigan, founder and executive chairman who wanted to find solutions to the carbon problems the world is facing. Corrigan has taken the initial concept through various iterations and designed the concept by collaborating with Co-Innovate. SolarBotanic Trees is currently conducting an Enterprise Investment Scheme-qualified funding round for commercial launch